Congratulations to the TDK Team at Charity Tag Rugby Tournament 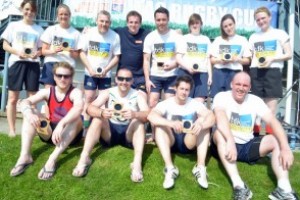 They got off to a great start winning their group with four wins from 4. They were pitted against a strong BTW Commercial team in the semi-finals. After falling behind early on, they started to take a grip of the game and with some excellent scores triumphed to set up a final against a combined Osborne King and Carson McDowell team. With a good crowd gathered and the sun splitting the sky, the match was a tight affair with the opposition only managing to break clear of the TDK defence in the last minute to score what proved to be the winning point. This saw Team TDK finish runners up but a great effort from all involved..

Congratulations to Osborne King/Carson McDowell on their victory and to BTW on running an excellent event. We look forward to returning next year…!